What happens if I need to care for an ill family member?

Where no one at home other than the employee can provide needs during the illness of an immediate family member or when the employee is the only one who can transport a family member for tests, treatment or other related medical matters, and employee may use a maximum of three (3) accumulated sick leave days per year for those purposes.

Please read on for general CUPE BC announcements and to learn more about upcoming events, learning resources, and community engagement opportunities.

Effective August 22, 2022, WorkSafeBC has implemented amendments to the Right to Refuse Unsafe Work. Workers have the right to refuse unsafe work if they have reasonable cause to believe that performing it would create an undue hazard to the health and safety of any person. Changes will now require employers to provide written notice of an unresolved work refusal to any worker subsequently assigned or allowed to perform that work, and to provide written notice of the reassignment to the joint health and safety committee or a union representative.
These important changes strengthen workers’ fundamental right to a safe workplace and their ability to make workplaces safer for everyone.

Late last week, the BC Government and General Employees’ Union (BCGEU) issued strike notice on behalf of their members who work in the provincial public service.
Yesterday, they began picketing at four liquor distribution centers: one in Victoria, one in Kamloops and two in the Lower Mainland.
They are striking for better wages and cost of living protections, both critically important given increasing costs we are all experiencing.

Our own provincial bargaining, as the K-12 Provincial Bargaining Committee, is still set to resume September 13-15. 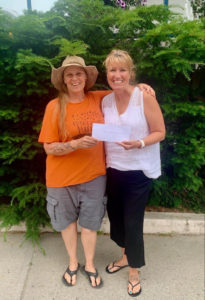 On June 11, CUPE local 748, who represents the support workers of School District 8, held a free community barbeque at Nelson’s Lakeside Park. Despite the rainy weather, there was a good turnout and $500 was raised to donate to the Aimee Beaulieu Transition House. A big thank you to those who donated and those who volunteered, including members of CUPE local 339 (workers from the City of Nelson) who manned the grill.
Pictured is Kathy Centrone from CUPE 748 (right) presenting the cheque to the Aimee Beaulieu Transition House’s Kim Strathopolous.
CUPE 748 is hosting a similar event in Creston on September 10 in Centennial Park with donations to the Creston Valley Gleaners Community Food Bank.

We remain committed to continuing our bargaining with the BCPSEA.  We recently scheduled dates for a return to provincial bargaining – September 13-15, 2022. We remain hopeful a provincial framework agreement centred on a fair wage settlement can be reached that reflects the value and importance of our work to students, families, and communities.

BC’s public school system is made possible by many people.
And we believe that a healthy public education system depends on the hard work of its people.
When we support our support workers, the whole community benefits.
View the video at https://fb.watch/dOe2eqxXxU/

There are no upcoming events.

CUPE 748 members are encouraged to join our private Facebook group.